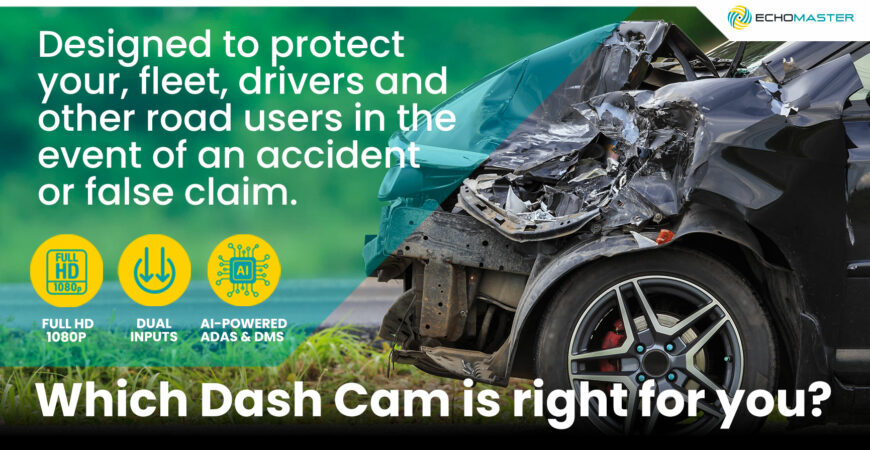 Dash Cams have been a hot topic in recent years with the increased safety aspects proving an attractive concept to drivers and fleet operators alike. The benefits of fitting a dashboard camera to your vehicle are plain to see, offering a live evidence tracker in the event of an accident, even if you aren’t involved is a clear advantage.

Many police forces often put a call out for any dash cam footage should an accident occur along with many insurers also taking into account any footage they receive following a traffic collision.

However, despite the elevated popularity of dash cams there are still many questions surrounding the topic that people want answered, so here is EchoMaster’s guide to dashboard cameras.

What is a dash cam?

A Dash Cam or Dashboard Camera is a digital camera mounted to the dashboard or windscreen of your vehicle facing forwards with its intent to record the road ahead. In the event of an accident dash cams will save the footage to either its own onboard memory or in the case of a Fleet dash cam to cloud-based server for retrieval at a later time.

Some even allow you to transfer footage to your phone or smart device via in built Wi-Fi. They are generally used for evidence in an accident and can be used to determine who is at fault and provide valuable information to the driver or the Police.

How do dash cams work?

Most dash cams will record footage as long as the ignition of the vehicle is activated. Footage will be regularly saved at certain timed intervals until the memory is full, then the cam will overwrite older footage with new footage to maintain operation. In certain cases lock files are created which will not be over written.

In the event of an accident the camera can either be activated by the driver manually (often with a button or motion sensor) or the camera will record automatically when a built in G-Sensor detects a crash. Once activated the dash cam will save the last few minutes of footage to maintain an accurate record of events.

There are a number of benefits to fitting a dash camera in cars or other vehicles. There are many different types of dash cam all with their different strengths. EchoMaster offer a range of commercial and fleet dash cams suitable for a variety of vehicles and uses, the DC-633-AI uses Advanced Driver Assistance Systems (ADAS) to alert the driver of possible forward collisions, lane departure.

The kit also comes with an internal driver-facing camera that provides remote feedback on driver distraction, fatigue, phone usage, and smoking, helping to reduce accidents and keep fleet vehicles on the road for longer.

The DC-623-4GG  Connected Dash Cam has both 4G functionality and is able to provide a complete real-time video & vehicle tracking solution across Mobile App, PC Software and Web Browser. This premium quality dash cam forms the basis for the majority of the EchoMaster kits but allows for additional cameras to work with it providing the clearest picture possible of the whole of the vehicle.

Our DC-633-DF-4GG not only comes with the previously mentioned Connected Dash Cam but also features a Driver Facing IP Camera to accurately capture the drivers actions in the event of an accident.

Featuring a High-Quality Commercial Rear-View IP Camera the DC-623-ER-4GG provides quality a quality image of both the front and the rear of the vehicle with an IP66 Water/Debris-proof rating designed to reduce the ingress of dirt or moisture no matter the conditions. This kit also comes with the Connected Dash Cam.

The final kit in the EchoMaster Dash Cam range is the DC-623-ES -4GG which features a Commercial Metal Side Mount IP camera along with the Connected Dash Cam. The side mounted camera allows for 720p visibility of the vehicles blind spot when mounting possibilities are limited.

Which dash cam is best?

Obviously when it comes to which dash cam is best there are so many different variables to consider that its tough to come up with a clear answer. Each camera has its own strengths. What you have to focus on are the features most important to you and then balance that with the price.

For example, there are many different image qualities available on the market ranging from D1 all the way up to 4k in some premium models. The clearer the image is the easier it will be to determine the events of an accident and assign blame to who’s at fault.

Additional features to assess would be memory size, not much of an issue for fleet dash cam users who can save footage to their providers server however passenger cars may want a larger memory card included in their camera. Wifi may be of interest to those wanting to transfer footage straight to their phone giving additional accessibility to their footage.

Can dash cams be used against me?

With the growth in use of dash cams both from a commercial and passenger vehicle standpoint it is understandable that in the event of an accident another member of the public may have footage they wish to bring forward. The Police will of course accept evidence from all parties involved including witnesses to give the best picture of the events that occurred. So yes dash cam footage can be used against you.

When it comes to your own dash cam footage being used against you, the police will often review multiple clips prior to the incident to assess if there are any obvious issues with your driving prior to the incident such as excessive speed, tailgating or swerving that could suggest a contradictory conclusion to the footage of the incident itself. However you do not legally have to provide the footage. Does having a dash cam lower insurance?

Depending on your insurance provider you could receive a lower premium with dash cams installed. Many insurers are aware of the additional safety benefits a dash cam can provide both in the claims process and in the event of an accident. Some insurance companies have in fact provided dash cams when taking certain types of policy such as Black Box insurance.

How to install a dash cam?

When installing a dash camera to your vehicle we strongly recommend that it is installed by a professional to maintain the manufacturer’s warranty whilst also providing the best possible image in all situations, it is a safety feature after all.

For more information about the EchoMaster Dashboard Camera range please click the button below or get in touch with our team now.

EchoMaster at the FORS Annual Conference 2022